Sorry folks, I broke this blog a while ago and it took me a while to get it back up. Sorry for anyone that was using it, turns out there was an issue with a PHP upgrade that was forced on me by my hosts.

The old theme doesn’t work anymore, but at least the content is up!

Let me know if anything doesn’t work. 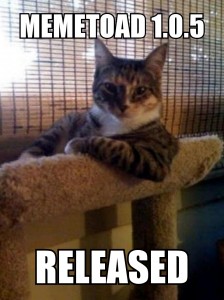 Just a quick note that MemeToad 1.0.5 has been released. It now has over 100 images included and also automatically scales the font based on the image and the amount of text entered.

Please let me know what you think of the app and if you like it don’t forget to leave a review. Thanks!

Today I released my newest Android App: MemeToad it’s a meme generator for your Android phone and/or tablet. I’ve been working on this app for the last while in the evenings.

It’s tough to find the time when you’ve got a family and a full-time job but I’m happy to have stick with it and put it out there. 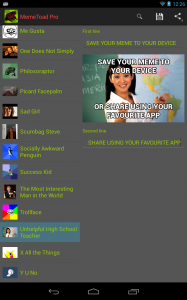 If you have an Android device and you are into meme’s check it out it’s free. I know it’s not Python related, but it’s all I’ve got.

Well it’s been over a year and there have been no updates to this blog. Sorry about that. I have been very busy with my family (my wife and I had another baby) and my day to day work. (Why is it that no one every told me how much of my free time would be spent with my young children? Rewarding? Yes. Time consuming? Yes.)

I do have something to announce to anyone that still reads this blog, and anyone that may be doing Android development. We have recently launched AirBop a GCM based push notification service for Android apps.

I won’t spend too much time talking about it, instead I’ll let the features page do that for me, but I will tell you that it’s a great way to add push notifications to your app. We’ve been working really hard on AirBop and we’re very proud of it. If you are an Android developer and you do check it out (free to sign up and register your first 1000 devices, no charge, no credit card, etc.) please let me know what you think. I can answer any questions about the service that you want.

We’ve also got a sample client up on GitHub: airbop-client that can help get you started with the implementation details.

Hey Everyone, or anyone that’s still around sorry it’s been so quiet around here lately, I’ve just had so much on my plate. Moving, baby, wife, work, a new homebrewing passion, reading, writing, and so on. All of this has led to very little time spent on this blog.

I have some things in mind for this blog, but I never seem to get around to writing the posts or doing the work. Hopefully I’ll be able to get back into it soon.

At work we’ve delved into the Android platform and created an online app builder called andromo, which means I’ve been writing a lot of Java and hanging out on smart phones and tablets. If you are interested you can see some of the apps that have been built and added to the Android Market in our showcase.

You can keep up with what I’m doing on twitter: @MarkAtAndromo or add me to a circle on google+ under Mark Mruss and yes I follow Guido. If you are not on Google plus and need an invite let me know in the comments.

Oh and I also write on the Andromo blog from time to time as well.

Hey everyone, just a quick note to let you know that Bohdan has translated the Creating a GUI using PyGTK and Glade tutorial in to Belorussian/Belarusian. You can view the translation here: Belorussian translation.

Many thanks to Bohdan and all the other who have translated some of these tutorials over the years.

Note: This article was first published the June 2008 issue of Python Magazine

With the release of Python 3.0 only a few months away many Python programmers have visions of compatibility problems dancing in their heads. This article will introduce the concept of future statements including two future statements that you can use to help prepare your code for version 3.0.

Python 3.0 (or Python 3000 as many people know it) is something that many Python programmers have started thinking about. Besides being the next major version of our beloved programming language, version 3.0 of Python will break backwards compatibility with the current 2.0 branch of Python. This means that a some of the code that you are writing right now in Python 2.X won’t immediately work in Python 3.0. Since Python 3.0 has a scheduled release date of September 2008 [1] now may be a good time to start thinking about future migration.

Of course there’s no reason to be alarmed yet. Guido, himself, has said that there is no rush to switch over to Python 3.0. [2] According to his PyCon 2008 essay “Python 3000 and You” you should switch when the following are true: “1. You’re ready 2. All your dependencies have been ported.” [3]

In the same essay Guido also says that Python programmers should be prepared and that they should “start writing future-proof” code for 2.5″ [4] In this sprit, this article will introduce “future statements” and two ways that you can use them now in order to make the migration process from the Python 2.0 branch to the Python 3.0 branch as smooth as possible.

The rest of this article, and the examples within, will assume that you are working with Python 2.5.
END_OF_DOCUMENT_TOKEN_TO_BE_REPLACED

The results are in for the first annual LearningPython.com Python version quiz:

Which version of Python do you use?

By a landslide version 2.6 is the winner, with 3.1 and 2.5 following far behind. A grand total of 1084 people voted and 700 of those still use Python 2.6, 187 use 3.1 and 182 use 2.5. While not the largest sampling of users the wide margin of victory probably means that most Python programmers are still targeting 2.6, or at the very least the newest version of the 2.x branch. Now what is installed on our end user’s system…that’s another matter all together.

Thanks again to everyone that voted. I’m happy that I was able to attract 1000+ people to vote in this poll. My next idea for a poll is an IDE poll, partially because I’m curious as to what people are using, and partially because there is a good chance that I may have overlooked other programs on my way to selecting Geany.

Hey Everyone, just an update on the last post. I was able to dig through the wordpress files and find where the hack was and it appears to be fixed now.

Again if you notice anything strange happening here, redirects to external sites and whatnot, please let me know.

Also, does anyone here use any of the python web frameworks? I’d like to try my hand at them, but I’m having difficulty deciding between Pylons, Django, and Zope. I’m a total n00b when it comes to web programming, so it’s something that I’d like to be better at, so one of my requirements is being easy for beginners to learn.

Just to let everyone who still reads this blog that it looks as though I have been hacked again.

Please don’t believe the rumours, I am not selling, nor will I ever, levitra online.

If you notice anything strange in the text on this blog, or you end up redirected to some strange site, please let me know.